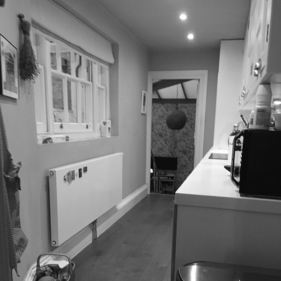 Virginia Woolf described Wimpole street as; “…the most august of London streets, the most impersonal. Indeed, when the world seems tumbling to ruin, and civilisation rocks on its foundations, one has only to go to Wimpole Street…”. With this in mind, in the context of 2020, it was quite fitting for the practice to have completed the transformation of a Grade II listed two bedroom ground floor apartment on this particular street in Marylebone.

The outline brief was to generally rethink and refurbish the apartment primarily by re-evaluating the layout, storage and decoration. Sound attenuation in certain parts of the property was problematic along with a lack of boundaries and definition of private and semi-private spaces within the apartment. The resulting intervention sits entirely within the existing envelope of the Georgian terraced house and creates a new insulative yet breathable layer along its external walls. The transformation of the property was based around linking a new series of vibrant spaces through a family of joinery ‘objects’ and an introduction of spatial hierarchy within the apartment.

Serving as a direct response to the original brief to create generous storage and a means to conceal the untidiness of everyday life, the design of the joinery pieces came from the synthesis of a number of disparate, yet linked ideas. There was an objective to create a joinery which referenced a regency style, the period the property was built in. However, the aim was to achieve this as a modern interpretation with a subtly as not to be pastiche. The cascade of curves on these pieces were arranged in such a fashion as to link views sequentially through the apartment. The design of the joinery pieces utilised off-site construction systems for its bespoke and curved units, resulting in fast and energy efficient method of manufacture and installation.

Two works by Stefano di Giovanni are also important to understanding the project. These helped conceptualise the joinery pieces as an internal architecture, housed within the larger volume of the building. They were designed with the ambition of being able subdivide spaces but also create a relationship with the vertical proportions of the rooms.